Now that second rough diamond cycle of 2016 is over and the Hong Kong March trade shows have ended, we can look at how the market acted during and after the events, and try to understand where it is headed.

The large supply of rough diamonds by De Beers and ALROSA is estimated at $1 billion, the second cycle in a row of such large supplies. We know that the shortage of “fresh” goods created a demand for nicer looking polished diamonds. Coupled by the brief demand from US retailers in early January and demands from Chinese retailers and jewelry makers in preparation of the Chinese New Year, there was justification for some, yet very specific, demand for rough.

A supply of rough in excess of $2 billion (together with supply from smaller miners and several mining countries), demonstrates a large supply of goods in a market with a few specific shortages and demands.

The secondary market’s response to this supply was nothing short of surprising. Instead of the mid-size and smaller companies demonstrating more caution in light of the current situation, it was they who displayed the strongest purchasing force. Mid-size and small manufacturers in India were willing to pay a large premium for goods that the larger and more established companies passed over.

We previously stated that these manufacturers are fueled by bank credit to the point of excess capital capacity. Several market sources are now reporting that capital utilization in India might be declining. However, and this is important, the decline in credit utilization is not consistent across the board. You may have guessed it – according to these sources, the mid-size and small companies are maximizing their bank credit and loans to the limit. In addition, the larger firms are taking opposite steps – reducing their dependency on credit.

If true, this is a further sign that there is no major need for rough in the market. On the contrary. If there were such a need, large manufacturers would have kept most of the goods for themselves and not just a few select items. Obviously, this is not a matter of limited financial ability either – after all, as stated, the large manufacturers have unused credit.

Some are taking advantage of this situation. Several second-hand traders are offering smaller parcels of rough to these mid- to small sized manufacturers. We hear that these parcels are sold at relatively high prices. They are tailor-made parcels aimed at those that don’t have deep pockets, looking to buy rough at any cost.

Similar trends are evident in some tenders where goods are offered in smaller parcels to make them more attractive to smaller manufacturers. Traders are reporting that prices offered by smaller suppliers in rough tenders are currently very high. According to traders, the De Beers Auction Sales and Okavango (ODC) auction and tender prices are near peak prices.

Concurrently, the past week has brought on a certain cooling effect. Premiums for De Beers and ALROSA boxes have come down. Buyers are expecting this price trend to soon be seen at tenders as well.

Conclusion: What we are seeing is a group of manufacturers buying enormous amounts of rough at very high and unprofitable prices, which will yield less than needed polished, using credit they may have difficulty paying off because the prices they’ll be able to achieve for the polished can only be low… What better definition for the circumstances that lead to a market to peril. Do you feel this is sustainable? Isn’t it our experience that when rough is purchased in (overall) large quantities with high premiums, the miners raise prices? Is demand for polished strong enough and prices high enough to make increased rough prices reasonable? I don’t think so.

Further about the rough market

I think the above is proof that my assessment of the market in the past few months was accurate. Over capital capacity in one diamond manufacturing center is resulting in some players acting in what can be viewed as shortsighted.

What about other centers? In Belgium, bank borrowing and manufacturing has declined along with reduced trading activity. This is a response to a decline in demand from consumers focused mainly on very specific goods.

In Israel, we see what some traders call “sane behavior.” Sales of polished are not high, but since Israeli traders are not very leveraged, they are not enslaved to high cash flow requirements and less prone to distress sales. Israeli traders are reporting orders for 0.14 carats down to 0.06 carats, G+, VS clarity that are “emptying” the market. Also, there are renewed orders for goods for watches. On the other hand, sales of 3 carat rounds are weak.

In the US, traders are close enough to the main retail market to clearly see where the real American consumer demands are and what is truly needed, and they stick by it, servicing their clientele on a very specific item basis.

After exhibitors returned to their offices and made a final tally of the show, we can say that our impression from last week was accurate. Exhibitors say it was average to above expectations, although expectations were low to begin with.

During the first day, traditionally a slow day when buyers mostly inquire about availabilities and prices, there were some tentative orders. Real purchasing took place in the final days, mostly by Mainland Chinese, less so by HK traders or Indian buyers.

Some articles, such as 30 pointers with GIA reports and dossiers, did very well. Pointers up to 1 carat (inclusive) sold at reasonable prices for the times and the cost of rough. Other items that did well too were fancy yellow, as demand from Chinese consumers has shown a sudden recent climb.

Larger goods are selling, but at relatively low prices. They include 3-carat goods that are moving slowly and 5 caraters with steady, however relatively inexpensive, prices.

According to several traders, sales pricing policies were driven by a desire to deplete inventories as quickly as possible before the large quantity of rough goods are polished and made available to buyers. This will happen in early April (rough from the first cycle) and in May (February cycle).

Conclusion: With that sentiment, we are seeing the ill effect of the large rough supply earlier this year. It is creating a cycle that can be characterized by mid-size and small manufacturers buying large quantities of rough with borrowed money. To ensure inventory attractiveness, they must sell the current polished supply at lower prices to make sure it’s moving. So their ROI (Return On Investment) on the rough that yielded this older inventory is poor.

Further, with polished goods offered at low prices now, they are setting a low baseline for future prices when the fresh supply arrives next month. As we know, they paid high prices for the rough and their chances of generating a decent return on the money is near nil. All this, before even addressing the need for restoring consumer faith in diamond jewelry, or generating a decent profit, let alone seriously increasing capital.

I must therefore present you with the following questions: where are the gatekeepers? The larger firms prefer buying lower cost polished directly from the smaller companies that are making distressed sales. They should instead consider refraining from buying the rough in the first place and take their part of reducing rough supplies (which they demanded from the main miners just a few months ago) and support firming up of polished prices.

We at Mercury Diamond track many different aspects of the industry, including demands, inventories and especially prices. Below is our monthly price list, based on February figures (click to download full size version). As you can see, our tracking of the market and analysis, with the exception of very few items, demonstrates that polished prices did not increase. If anything, polished prices remain steady, with a few price declines. 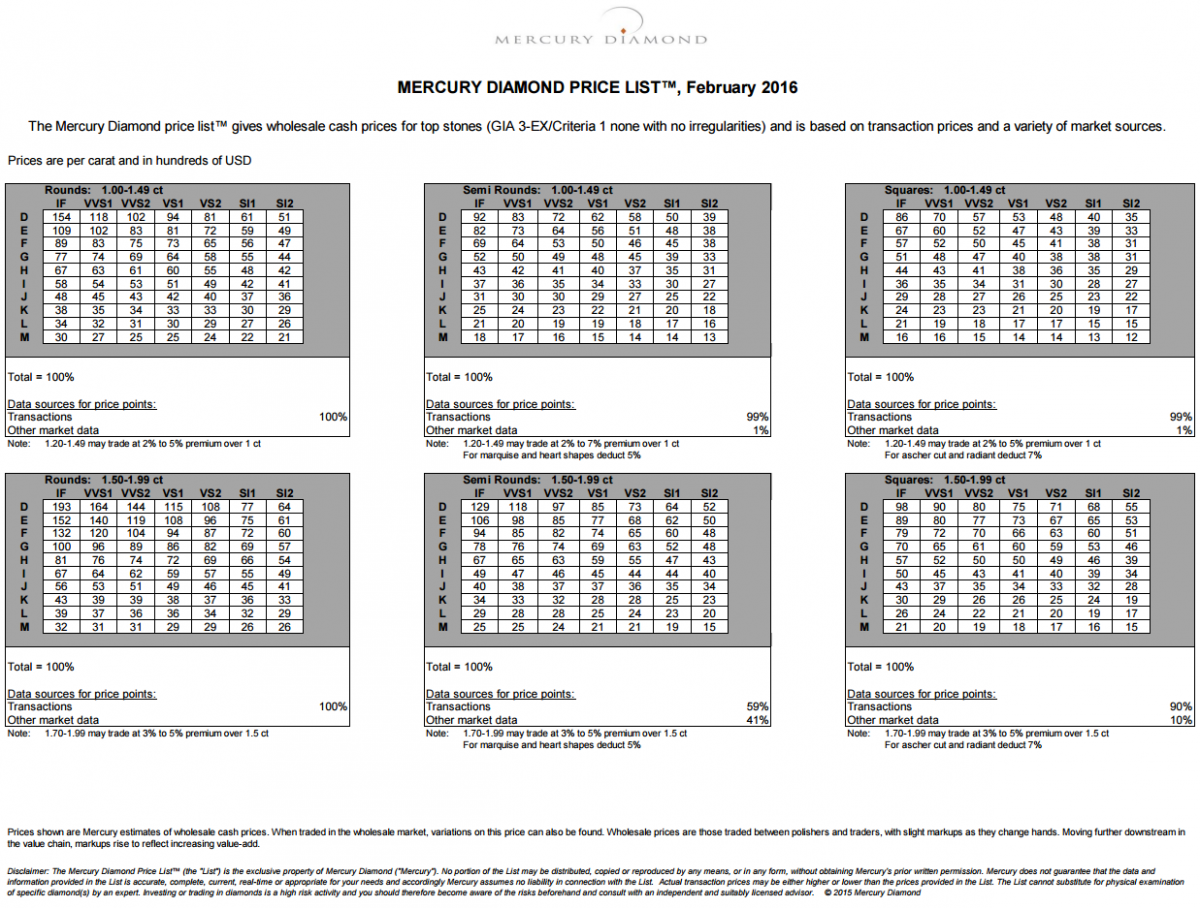 To further emphasize the point, I wish to unveil another tool we have developed, the Mercury Diamond Global Tracker™. It is an index of polished diamond prices that tracks actual wholesale transaction prices of more than 450 different items, of all shapes, colors and clarity levels, from 1 to 30 carats.

As you can see, overall prices increased until mid-2014 and then tumbled. In May 2015, overall price declines started to moderate, flattening in the past couple of months. In February 2016, the index stood at 119.8, declining a negligible 0.04% compared to January.

Conclusion: Price declines in recent months have moderated and the occasional rise in demand for a few specific items in recent weeks have not changed the tide. The diamond industry, especially the midstream, is still in a perilous position and we are yet to see any changes or signs of improvement. We stand by our assessment of last week and continue to feel that the crisis is not over yet.

Can’t we adjust our purchases to real demands? Buy what is needed, pass on what is not and turn profitability around? As an industry, isn’t that the path for the entire pipeline and the midstream in particular? All indicators direct us to those conclusions. Wouldn’t you agree?