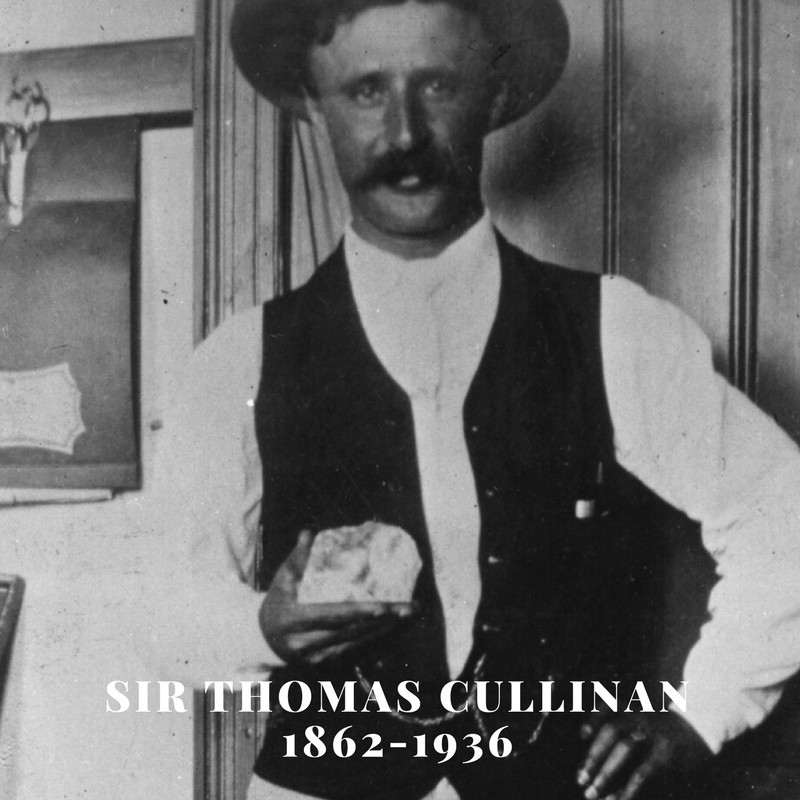 Most people in the diamond industry immediately recognize the name Cullinan as belonging to probably the most famous rough diamond in history, and several of the most famous polished diamonds in the world today. They are likely also familiar with the Cullinan mine in South Africa, which has produced some of the most magnificent diamonds in history, including the Blue Moon which diamond industrialist Ehud Arye Laniado was fortunate to have been a part of. But few of us know much about Sir Thomas Cullinan, the namesake of both the mine and the largest gem-quality rough diamond ever found.

Cullinan was born in the Cape Colony (modern day South Africa) in 1862. He moved to Johannesburg in 1887, where he worked as a bricklayer. In 1896, he founded a plant at Olifantsfontein for the production of bricks and tiles. Diamond mining was already established in Kimberley at the time, and Thomas turned his eye to prospecting using what limited savings he had accumulated. A small number of diamonds had been found in the lands surrounding the Cornelis Minnaar farm in Elandsfontein, and the astute Cullinan correctly recognized that these diamonds must have been carried there by alluvial river systems. He believed that the high ground of the large property must contain the source of the diamonds that had been carried down from elevation, and sought aggressively to purchase the farm, but its owner, Willem Prinsloo, refused to sell.

Prinsloo passed away in 1898, shortly before the onset of the Boer War. Prinsloo's family, which had grown increasing desperate for money, inherited the farm. Prinsloo's daughter eventually conceded, and sold the farm to Thomas Cullinan for £52,000, nearly 7 million in today's dollars. Cullinan's assumptions would be proven entirely correct, and the Premier diamond fields would be discovered after a few years of trial-and-error exploration. Perhaps not even he could have imagined the scope of the mine he had discovered, with a surface area of 32 ha. Cullinan would establish the Premier (Transvaal) Diamond Mining Company in 1902. The Premier mine went into production the following year, and continues producing diamonds to this day.

Around the same time, De Beers Consolidated Mines was in the process of buying up all diamond operations in the region under Cecil Rhodes and his predecessor Francis Oats. Cullinan did not yield to the pressure, and refused to sell to De Beers. Oats dismissed the threat from the Premier discovery. By 1908, the Premier mine would produce more diamonds than all of De Beers' operating mines combined. Cullinan instead elected to sell his stones through two well-connected independent diamond dealers, Ernest and Bernard Oppenheimer.

On January 26, 1905, Cullinan would etch his name in immortality with the discovery of the largest gem-quality diamond ever unearthed, a 3,106.75-carat gem. Interestingly, and despite many incorrect media assertions to the contrary, the Cullinan is actually the second-largest diamond ever found. The largest diamond was discovered 10 years earlier in Brazil, and outweighed the Cullinan by 51 carats. Owing to its lower quality as a black carbonado diamond, the Sergio has been mostly forgotten in the pages of history.

The Cullinan diamond received worldwide attention at a time when news travelled slowly. The diamond was discovered by miner Thomas Evan Powell, and immediately given to his supervisor, Frederick Wells. Wells was awarded £3,500 for the find, although there is no record of whether he shared any of the proceeds with Powell. Owing to one flat surface of the stone, it is believed that the Cullinan was actually a fragment of a much larger diamond that was broken by natural forces. The stone was immediately named after Cullinan, and purchased by the Transvaal Colony government for £150,000, but was insured for ten times more.

Parliament voted on what should be done with the diamond, with the Boer majority suggesting it should be given to King Edward VII as "a token of the loyalty and attachment of the people of the Transvaal to His Majesty's throne and person". The English-speaking minority felt no such obligation, but the majority won, and the stone was gifted to the English monarchy. The task of cutting the stone was given to the Asscher brothers of Amsterdam, and they cut the rough stone into nine major stones, and 96 smaller ones.

Cullinan's Premier mine would finally be absorbed into the De Beers cartel during World War I, when diamond prices collapsed, and Cullinan needed the De Beers supply system. De Beers would continue to operate the mine until 2007, when they sold it to a consortium led by London-based Petra Diamonds. In 2003, in honor of the mine's centenary, it was renamed the Cullinan Diamond mine. The mine operates nearby the town of Cullinan, named after the man who created this now-bustling town, where nothing had existed before.

In addition to his chairmanship of the Premier Mine, Cullinan was chairman and director of New Eland Diamonds Ltd., a director of several gold mining companies, and owner of the Consolidated Rand, Brick, Pottery & Lime Co. Ltd. He was also interested in farming and forestry, and owned several farms and plantations.

Cullinan also took a keen interest in politics, and was a strong promoter of responsible government for the Transvaal State. He represented Pretoria North in the first Transvaal parliament. He would become a great advocate for the Union of the Cape and Transvaal Colonies, which joined the Union of South Africa in 1910. In the same year, Thomas Cullinan was knighted for his contributions at the inauguration of the Union of South Africa, presided over by the Duke of Connaught as a representative of King George V. He fought during the First World War in a campaign against the German army in South West Africa (modern day Namibia). He earned the nickname "Major," which stuck with him until his death in 1936, at the age of 74.

More posts from author
Tuesday, 12 October 2021 Diamond Manicure The Most Creative (and Outrageous) Products Made with Diamonds - Manicure
Tuesday, 05 October 2021 5 Tips to Take Better Care Of Your Diamonds
Tuesday, 14 September 2021 Did Anyone Say Diamond Dinner?