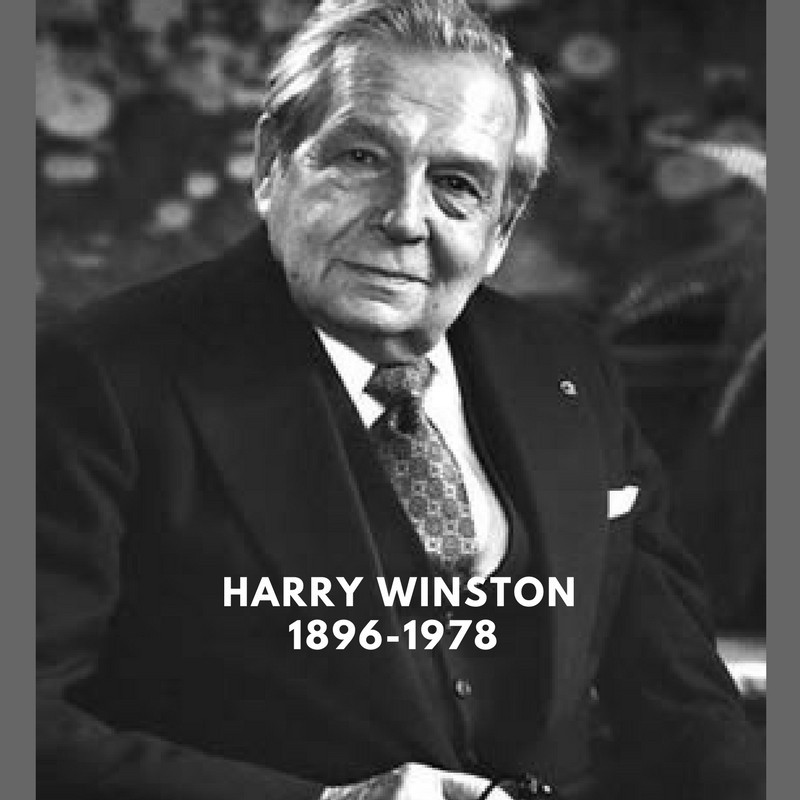 Harry Winston such a well-known name outside of the diamond industry that numerous books have been written about his legacy and the many famous stones and people he was associated with. He became known as the "jeweler to the stars" with his focus on the Hollywood A-list. The list of magnificent and important diamonds that he bought and sold in his lifetime trumps anyone else in history. Through his brilliant marketing with famous celebrities, he made diamonds a coveted treasure of their fans, which continues to this day.

He was born in New York in 1896, six years after his parents emigrated from Ukraine. His father Jacob set up a small workshop and jewelry repair business, and Harry worked there as a child while going to school. His mother passed away when he was seven, and the family moved to California to establish an outlet in Hollywood. He learned the jewelry and gem trade at a very early age. As legend has it, at the age of 12, he bought a ring from a pawnshop 'junk tray' for $0.25. He realized that the ring held a 2-carat emerald, which he apparently sold a few days later for $800.
After finishing high school, he traveled to the west of the country, buying precious stones for his father's shop. By 1914, at the age of 17, he moved back to Manhattan to set up his own repair shop on the Upper West Side. Two years later, he opened Premier Diamond Company with $2,000 of his own savings and began buying and selling diamonds on the New York Diamond Exchange. His skills for spotting a deal became very apparent, and within two years he had grown his $2,000 investment into a company with over $30,000 in cash and inventory. However, he almost went bankrupt overnight after an employee stole the entire stockpile of cash and diamonds.
Soon after, he began buying diamonds from estate sales, recognizing that the gems could be purchased more cheaply, because the settings were often old and out of fashion. Winston set many of the stones in more contemporary settings and sold them for big profits. In 1925, he purchased the jewelry collection of Rebecca Darlington Stoddard, a wealthy Pittsburgh coal and iron heiress, for $1 million, and the following year he purchased the collection of Arabella Huntington for $2 million. His practice of purchasing estate jewelry and refashioning the pieces for resale made Winston a wealthy man again. In 1930, he gained national fame with his purchase of the Baldwin collection, which included a 39-carat emerald-cut diamond.
In 1932, he closed the Premier Diamond Company and opened Harry Winston Inc. in New York. Winston was a very private man in his personal life, but he marketed his company very heavily. He heavily publicized all of his major diamond purchases, and word spread quickly of his success. One of his most influential purchases was in 1935, when he bought the 726-carat Jonker Diamond for $700,000. It became the first major stone to be cut in the United States, a job that was entrusted to Winston's friend Lazare Kaplan. Winston feared for the security of the diamond and could not find anyone willing to insure it. He decided to ship the stone from South Africa in a plain unmarked envelope in the regular mail, at a cost of $0.64. The 12 resulting polished diamonds were all cut and sold in the United States for $2 million, and Winston gained notoriety in America as a result. The largest stone from the Jonker was a 125.35-carat emerald-shaped diamond that many claim is the most perfectly proportioned emerald cut diamond in existence.
Since Winston's teenage years in Hollywood, he had an attraction to the Hollywood celebrity scene and used celebrities as a brilliant marketing tool. He first lent diamonds to actress Jennifer Jones for the 1944 Academy Awards. The tradition of dressing leading ladies continued and, in 1947, Katherine Hepburn wore the 15th century Inquisition Necklace on loan from Harry Winston. Halle Berry was front-page news in 2001, when she wore Harry Winston's rare Pumpkin Diamond on her finger as she collected her Oscar for Best Actress and made history as the first African-American to do so. Sophia Loren, Scarlett Johansson, Gwyneth Paltrow, Charlize Theron, Jennifer Lopez and Adele have all added extra dazzle to their most celebrated moments with a Harry Winston diamond.
Arguably Winston's most famous acquisition was the Hope Diamond, which he bought from the estate of Evalyn Walsh McLean in 1949. Soon after McLean acquired the stone from Cartier in 1911, it became associated with a curse as tragedy after tragedy afflicted McLean and her family. Winston would go on to donate the Hope Diamond to the Smithsonian Museum of Natural History in Washington, DC in 1958, where it has been ever since. Smithsonian magazine noted that the Hope Diamond has only left the museum four times in nearly 60 years. When sending the stone to the Institute, Winston again sent it in an unmarked brown envelope, although this time through first class registered mail. The original packaging remains on display along with the diamond which receives about seven million visitors every year.
By the late 1940s, Winston was a multimillionaire and turned his attention to philanthropy. He wanted to showcase his love of precious jewels to the world and established the 'Court of Jewels' which ran from 1949-1953. The collection included many famous stones, including the Hope Diamond, the Indore Pears, the Idol's Eye, the Jonker, the sapphire of Catherine the Great, the Star of the East, and the Spanish Inquisition Necklace. The roadshow visited numerous US cities, raising money for worthy causes at each stop. It was championed by Bob Hope among others. By its end in 1953, Winston reportedly had amassed the second most valuable collection of precious gems in the world, second only to the British royal family.
In 1960, Winston moved his collection into a new Manhattan location at 718 Fifth Avenue. This would represent perhaps the largest transport of diamonds in history. It was then that he implemented a ban on anyone taking his picture in public for fear of his personal security or that of his family. He would break his own rule in 1968 with a live television broadcast of the cleaving of the 601-carat Lesotho diamond. One of the finished stones from the Lesotho was later purchased by Aristotle Onassis as an engagement ring for Jacqueline Kennedy. The flagship New York Salon has remained at its 5th Avenue address ever since.

Harry Winston died in 1978 at the age of 82. His company passed to his wife of 45 years Edna. Upon her death eight years later, Winston's two sons, Bruce and Ronald, inherited the company. After a very bitter and public fight for control of the company, Ronald Winston paid his brother $54 million to buy his stake in the firm. The company was later acquired by Canadian diamond miner Aber, and in 2013, they sold it to Swatch, which still owns it.